The next story really happened : one Sunday afternoon, a couple of miles before the approach of the motorway in Reims. Six people are standing next to a minivan and ask us to stop.
We: "Breakdown?"
They:" No, we just had an alcohol control. Our driver tested positive and the police took him away. So here we are..."
We: "Is there nobody else who can drive?"
They: "No, we all had too much to drink. You don’t drive all this way to drink water, do you? Take care; perhaps there is another alcohol control further on."
We: "We don’t have to worry, we have a driver who doesn’t drink."
They: "What? Is he a teetotaller?"
We: "Not at all! He will open a bottle of champagne when he’s home in a couple of hours. You’ll probably still be standing here beside the road. Allez, courage mes amis … et bon retour!"
They: "Grumble" .. 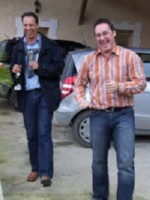 Les flics, les keufs, les poulets, those are popular names for the local police who pop up everywhere : alongside a busy road, but also on a scenic route between the grapevines. Don’t think you’ll never bump into them’

Every day hundreds of champagne lovers drive through the region. And they aren’t all sober. Understandable but not wise...
Drinking and driving is all too often the cause of severe accidents. In the French wine regions they do step up their efforts to control drivers compared to other regions.
So be sensible and don’t drink and drive.

In drugstores, supermarkets or car shops you can easily find alcohol breathalyzers. If you want to be absolutely sure about your alcohol level before you take the wheel, buy such a self-tester. There are two kinds of testers : chemical and electronic ones. The chemical ones, using showing above the limit identification in colour, are the cheapest, but can only be used ones. The electronic testers are more expensive but you can find them in the shape of a key holder for less than 10 euros.

Tip for the other members of the group:
You cannot differentiate the flavours if you’re pleasantly inebriated. You’ll probably like everything you taste and might spend a fortune on a champagne you’re not so fond of when sober. That kind of behaviour also shows little respect for the producer.